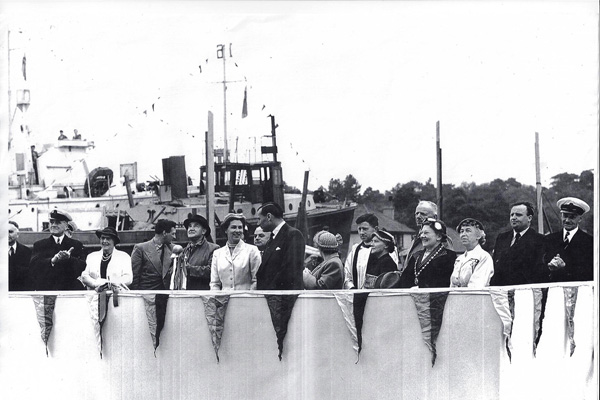 Around 300 guests, staff, business associates and the Culpan families celebrated the 75th Birthday of Dorset Yacht Company, the home of Boston Whaler UK, with a series of events over the weekend of 30th November 2013 at the companys’ waterfront marina in Hamworthy , Poole Harbour.

Saturday was launched with a performance from the Poole Sea Cadets Band followed by cannon fire and the arrival of the RNLI Lifeboat.  Refreshments and glorious sunshine were soaked up by guests, in amongst a display of historical shipyard memorabilia and Classic Boston Whalers, with pride of place taken by an original 1963 model Boston Whaler 13.

Russell Culpan, Managing Director of Dorset Yacht Co said “We are very proud to be here after 75 years of family management, still doing what we love.  It has been so special to see support not only from our current staff, friends and business associates, but also from staff engaged as far back as 1940!”

The company was originally started in 1938 by Mr H V Culpan and together with his son Tom Culpan, they developed a rich history in the building of pleasure, commercial and defence craft.  In the build up to and during World War II,  Dorset Yacht became a major player in the war effort by building over 20 MTB’s (motor torpedo boats), MGB’s and Air Sea Rescue craft and then after the war, a number of Mine Sweepers.

The 1960s welcomed  a return to commercial boat building and development of a range of pleasure boats with well-known designer, Arthur Hagg, who was the De Havilland Aircraft Company’s chief designer.

In the early 70’s DYC began as a dealer for the American built Boston Whaler pleasure craft which lead to their sole UK/Republic of Ireland/Channel  Islands Distributorship – now for over 35 years – a long and happy association also to be celebrated.